Top 25 Best Architects Of All Time

Top 25 Best Architects in the World

Some of the best architects in the world today maybe unknown to an average person.

Most people can only recognize some of the most popular buildings in the world but not the architects behind these buildings.

Architects are a rare breed of personalities in society today.

This is because they make provision for the second basic need of man which is a shelter.

The work of an architect, like most professions, requires passion, creativity, and skill.

In the world today, some architects have made innovative impressions in buildings and designs through original and imaginative thinking.

Popular Works of the Best Architects that ever Lived

The works of architects have successfully moved us from the Stone Age to the information age.

The buildings they design are not just meant for us to live in, but most of these buildings give our cities an identity.

These works of art are also a historical form of expression. Such as the Pyramids of Giza in Egypt, the Golden Pavilion in Japan, and the Taj Mahal in India.

Some of these buildings span over centuries old.

As such, some of the best architects the world has ever known are actually unknown.

So in this article we have compiled a list of 25 best architects in the world today.

However, some of the architects in this list are no longer practicing.  And even some, unfortunately, have passed on.

These architects have come up with exceptional and excellent innovations in the world of building designs today.

A List of the Top 25 Architects in the World.

Frank Wright is one of the famous architects in the U.S. He was born in 1867 in Wisconsin and hailed from the United States of America.

His rural childhood environment stirred up his love for nature which led to the great work he achieved.

Wright designed a total of 141 buildings amongst museums, churches offices, including his residence.

Frank, received awards both from the Royal Institute of British, Architects and American Institute of Architect for his great works. 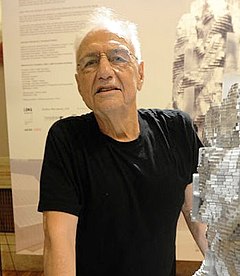 The contemporary architect Frank Owen is popularly called the “starchiest.”

This is because of his great architectural designs known to the world today.

He was born in February 1929, in Canada, and he’s a Canadian_ American.

He studied at the University of Southern California. Some of his work includes Frank Gehry Residence, Guggenheim Museum in Bilbao, Spain.

Dame Zaha Mohammed Hadid, a notable architect of her era.

Born in Baghdad in 1950 and hails from Iraq.

Zaha Hadid is the first female to win the Pritzker prize award in 2004. , she won the order of the British Empire of American Institute of Architects in 2002.

Also,  in 2011 she had the  Stirling prize of her Evelyn Grace Academy, London.

Philip Johnson innovations are one of the designs that will continue to inspire people all over the world. Johnson was born in 1906 and graduated from Harvard Graduate School of Designs. He found the Department of Architecture and Design in New York City, called the Museum of Modern Arts. Johnson’s style of designs is glass, steel, and crystal. In 1978, Johnson won the AIA Gold Medal for his architectural works. His architectural designs are the Crystal Cathedral, the Seagram building in New York City and his residence in Berlin, Germany.

The famous modern day architect Leoh Pei is Chinese, born in 1917. Leoh Pei got his foundational education in the U.S. at Pennsylvania University School of Architecture. His technique is simply geometric forms with an influx in Chinese elements. Leoh designs are impressive and acknowledged all over the world.  Some of his outstanding designs are the Bank of China Tower in Hong Kong, John F Kennedy Presidential Library and Museum in Boston. Furthermore, the National Gallery of Arts in Washington D.C, and the Museum of Islamic Arts in Doha.

Ole Scheeren, a German architect, was born on 6th January 1971. In 2015 his contemporary building the Interlace, in Singapore won the world building of the year. Ole uses a formula for his style of design which is known as the three Fs each F representing forms follow and functionality.  Apart from Interlace other notable designs are CCTV headquarters, Beijing, DUO, and Singapore.

The renowned architect Rem Koolhaas is globally known for his unique deconstructivist style of designs. He is from the Netherlands and was born on 17th November 1944. He studied at Architectural Association School of Architecture, Cornell University. In 2000 he won the Pritzker Prize. His notable works are as follows, Seatle Central Library, Seoul National University Museum of Art, De Rotterdam, and Rotterdam.

Daniel Libeskind hailed from Poland and was born on the 12th of May, 1946. He studied at the Cooper Union and The University of Essex, for his first degree and master’s degree respectively.  His choice of design can be classified as de_ constructivism. His embellished designs are The Jewish Museum in Berlin, the Grand Canel Theatre in Dublin and the Imperial War Museum North in England.

Peter Eisenman is another American architect who was born in 1932. He belongs to a group of famous architects in New York City, referred to as the New York Five. He uses the approach of high modernism. He studied at Cornell University, Columbia University and Cambridge University, where he obtained the (B.A), (M.A) and (Ph.D.) degrees respectively. Some of his stunning ventures are House VI, Holocaust Memorial, Europe, and City of Culture of Galicia.

Santiago Calatrava hails from Valencia Spain. He was born on 28th July 1951.  He schooled at polytechnic university of Valencia where he studied architecture. Architect Santiago’s choice of technique is structural engineering blended with architecture. Some of his know designs are the 54_ story high twisted tower called the Turning Torso in Malmo Sweden Also, Florida Polytechnics Science, Innovation and Technology Campus.

Robert Meier, a renowned architect, got his architectural skills at Cornell University; Meier has won several awards including the famous Pritzker prize for architecture in 1984. Also in 1997, he received the AIA Gold Medal award. Meiers had his office established in New York in 1963. His designs are spread abroad in the United States, Europe, and Asia. Most of his prestigious designs are the Getty Center in Los Angeles, the Jubilee Church in Rome, Italy, The High Museum of Art in Atlanta and the Neugebauer House, amongst others.

Renzo piano an Italian architect and designer, born on 14th September 1937. His preferred technique or pattern of design is the use of numerous features of modernism. Piano graduated from Politecnico di Milano, Milan. Awards received by Piano includes Italian Order of Merit, 1994, Premium Imperiale, 1995, the Pritzker Architecture Prize, 1998 The AIA Gold Medal, and Knight Grand Cross Of The Civil Order of Alfonso X in 2017. His designs are, the Shrad, London, Parliament House of Malta, Centre Georges Pompidou, and Paris, France.

Norman Robert is a British architect, born on 1st of June 1935. His approach to architectural designs is high tech architecture. Studied at the University of Manchester School of architecture. Due to his outstanding architectural designs, he has won several awards such as the Stirling Prize, Pritzker Architectural Prize, the price of Asturias Awards and AIA Gold Medal, just to mention a few. His notable designs are 30 St. Mary Axe “The Gherkin” London, HSBC Building, Hong Kong, and Apple Park, California, USA.

Architect Shigeru Ban is Japanese, born the 5th August 1957. He employs a simple design called the invisible structures.  Some of the awards received by Shigeru Ban include the national order of merit France in 2011 and the prestigious Pritzker prize in 2014.  Some of his finest designs are Paper Dome, Taiwan, Aspen Art Museum, Aspen Colorado, and Nomadic Museum.

Architect Ben van Berkel a Dutch was born in 1957. He studied Architecture at Rietveld Academy Amsterdam. His approach to architectural designs is material organization and engineering constructions. Some of his famous works include Theatre Agora, Mercedes Benz Museum, and W.I.N.D House.

Alvero Siza born in 25th June 1933 hails from Portugal. He studied architecture at the University of Porto. He won the Pritzker prize award in 1992. He adopts and believes in the technique of transformational reality. Alvero Siza finest works include Expo 98 Portuguese national pavilion and the building on the water.

Antoine Predock is an American architect born in 1936. Predock passed through his University in New Mexico where he studied architecture. He received the AIA gold award in 2006. Among his famous designs are the Turtle Creek House, Canadian Museum for Human Rights and Trinity River Audubon Centre.

Moshe Safdie is a Canadian architect born in 14th July 1938. He read architectural science at McGill University. His choice of style portrays meaning in architecture through the use of lines and curves in geometric creation.  He has several awards including the AIA Gold Medal Award. Some of his masterpieces include Habitat 67, Marina Bay, Singapore, and Khalsa Heritage Memorial Complex, Anandpur Sahib, India.

Cesar Pelli was born on 12th October 1926. He has a degree in architecture from the University of Tucuman. He believes that the aesthetics of a building is determined by its location, construction technology, and its purpose. In 1995 Pelli bagged the AIA Gold Medal, among other awards. His creations include Petronas Towers, BOK Centre and Kuala Lumpur, Malaysia.

Antoni Gaudi who hails from Spain was born in 1852. His approach to architectural design is   Modernism, Gothic Revival architecture and Organic architecture. Some of his impactful designs are thus:  Sagrada Familia, Church of Colonia Guell, Episcopal Palace, and Astorga, Palau Guell.

The Danish architect, Bjarke, was born on 2nd 0ctober 1974. He is known for his sustainable developmental ideas and sociological concepts in his designs. Bjarke Ingels noted as one of the famous architects today, has his work to speak for him. They are Beach and Howe and West 57th street.

Architect Jean Gang, one of the notated designers, was born in 1964. Her technique is an environmentally sensitive approach. She has a degree from the Harvard graduate school of design. Some of her masterpieces include Aqua Tower, Arcus Center for Social Justice Leadership and The WMS Boathouse at Clark Park.

Kengo Kuma is a Japanese architect born in 1954. He studied architecture at the University of Tokyo. Kumas architectural goal is to recover the lost tradition of the Japanese buildings into the modern world. His architectural know _how won him the architectural institute of Japan award in 1997. Some of his key projects are Starbucks Coffee, ArtA Cultural Centre, Suntory Museum of Art in Tokyo, and Bamboo Wall House in China.

In this list of the best architects in the world, we have seen buildings that were born to articulate the best of architectural work.

The quest for architectural mastery thrives through ideas and passion.

This Passion is stirred up with a goal and style that would remain legendary in the hearts of men.

In today’s world, architects have not only met the need for shelter; they have equally sharpened the world's view as it concerns architecture.

And it's a fact that some of the best architects in the world continue to produce amazing work.