It is no surprise that almost all the medieval castles featured in this post are located in Europe.

Europe as a continent is known for having royalty norms and tradition. 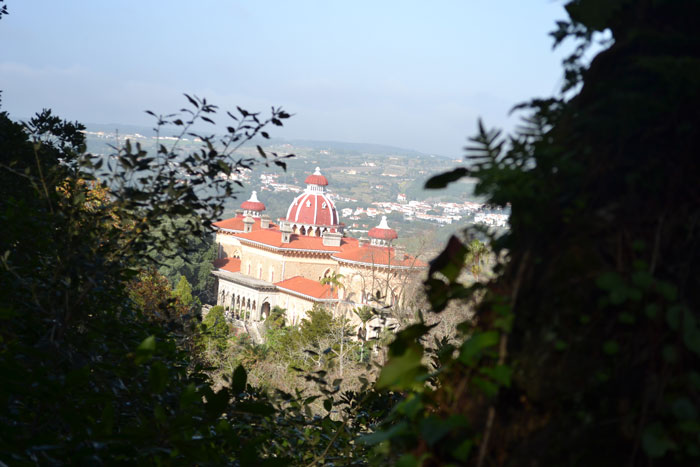 We hear terms such as castles, knights, princesses, horses, kings and queens and so on.

These and more make medieval castles a very symbolic architectural feature for the whole of Europe.

Apart from the fact that these castles display royalty, they also add beauty to the places in their environment. 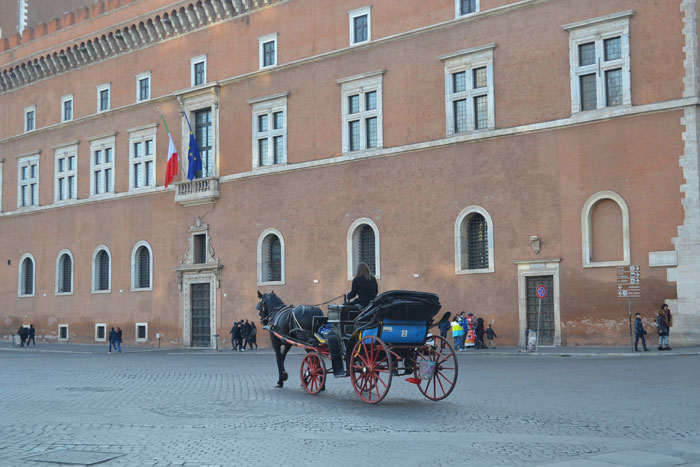 These are the Top 15 Most Beautiful Medieval Castles

The original Pierrefonds Castle was built way back in the 12th century.

Then sometime in the year 1392, some architects hired by King Charles VI re-designed it in respect of his brother Louis, Duke of Orleans.

The awesome architectural design resides somewhere in Picardy, which is a region in northern France standing between Belgium and Paris.

However, some major parts of the medieval castle were destroyed at some point in the early 17th century and were eventually revived by Napoleon in his reign during the 19th century.

Now the castle has become a very attractive structure that it is today.

The castle now appears in several television programs and movies which include The Messenger.

Many people may not have known, but this castle is real and still existing.

The Mont Saint Michel is one of the oldest medieval castles in the world today.

This castle was built in the 9th century and became the residence of Saint Michel’s monastery.

The ancient structure was situated in Normandy, on an island commune in France.

Since this structure was built on an island, attacks were impossible in times of war.

Those years, the people fought many battles. The structure built on an island was one of its defensive strategies.

Also, the gigantic walls that surround the interior part of the medieval castle assured the safety of the people within. Interestingly, for about a hundred years of war experience, the Mont Saint Michel Castle survived without sustaining damages.

The Castle of Coca was built mainly for residential purposes due to its luxurious appearance.

This luxurious structure was built in the 15th century, in Spain. The castle was constructed with bricks rather than stone, that is why it has a reddish appearance.

One unusual activity that goes on in the Castle of Coca is the service of the school of forestry, even though it is still accessible to visitors.

The construction of the Ksiaz Castle was completed in the 13th century in the year 1292.

The home of this medieval castle is in Poland. People consider it as one of the largest castles in the country. The castle is renowned for its blue and pink pastel color appearance.

Beneath the castle, there is a set of spanning tunnels. For the first few centuries of its existence, the castle served the Bohemian royalty.

At some point during WWII the castle was seized by Nazis from the Hochberg family who had it at that time.

A rumour also has it that Adolf Hitler had a plan to live in the Castle.

At the end of the war, some artefacts were destroyed inside. However, architects have restored the former glory of the art gallery, hotels, and restaurants.

The construction of Bran Castle occurred in the year 1388.

The medieval castle is situated in Romania, right between Transylvania and Wallachia (the border) and due to its linkage with the Dracula Legend; it is more often referred to as the Dracula’s Castle.

No wonder people say that Bram Stoker’s novel (Dracula) derived its inspiration from Bran Castle seeing that the castle’s description fits the home of Count Dracula.

The Bran Castle of today has become an art and furniture-filled museum. Thanks to the queen of Romania, Queen Marie who ruled in the 1920s and 30s.

She is responsible for the collection of the items in the museum. 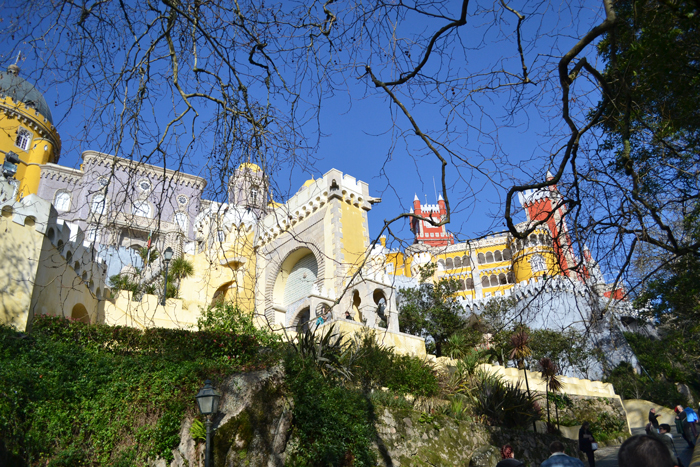 The Pena National Palace was built in the year 1854 (19th century). This medieval castle has an architectural design of epic combination that includes Neo-Renaissance and Neo-Gothic.

People recognize it by the trappings of its vibrant grey, yellow and clay colors. The castle is located at the top of the Sintra Mountains in Portugal.

It is included as one of the country’s Seven Wonders of Portugal. Also, people regard the Pena Palace as a UNESCO World Heritage Site.

The UNESCO World Heritage Site considered Conwy Castle as one of the finest architectural designs in Europe.

The building of the Conwy Castle As at 13th to 14th century, was done by King Edward which he used at the time of his conquest of Wales in 1283 to 1289.

Jeremy Ashbee, a famed British historian, confirmed Conwy Castle to be the most preserved suite of medieval private royal chambers in England and Wales.

This castle was built on a rock commonly called Castle Rock, noted to be occupied since the second century and as believed by the historians.

The Edinburgh Castle has been in existence, there on the Castle Rock since the 12th century. The castle is considered to be among the most haunted locations in the whole of Scotland as it stands now.

According to records a piper mysteriously disappeared into the tunnels. The report has it that his spirit lives there.

Although Edinburgh Castle has these scary myths, it is still regarded as the most recognized tourist center in the country and serves as a prominent center for Education.

The Eilean Donan Castle based in Scotland rests on a small island where three lochs coincide.

You see, the purpose of constructing this structure was to protect the area from the attack of the Vikings.

This medieval castle was built in the 13th century. Different from the other medieval castles on this list, designed mainly for artistic appearance, the Eilean Donan Castle was constructed for battles.

Right from the time the medieval castle was built until now, records have it that it had undergone refurbishing so many times.

After the castle was used pretty well into the 18th century, it was attacked in the year 1719 by the English. After the attack, it remained in ruins for nearly 200 years.

It took a minimum of two decades for the restoration of the castle by Lt. Colonel John Macrae-Gilstrap after he had bought the island. The public now has access to the Eilean Donan Castle.

In Japan, in the 16th century of the Edo period of Japan’s feudal era, the construction of the Nagoya Castle began. It was in the year 1612 during the commission of Ieyasu Tokugawa that architects completed the building.

The castle got the name when a warlord seized power to control the original medieval castle, and this happened immediately after the construction of the castle.

During the WWII military operation of Japan, the army used the castle as a POW camp and a strategic headquarters.

In the long history of the medieval castle, it was never heard that the castle underwent such degradation as that of this time plus the damages it incurred.

The Hever Castle, which is renowned for the attractive gardens it has, is situated just about 30 miles south of London, in Kent.

The properties it has included are a pristine lake, winding yew maze, and topiary.

Furthermore, it is recognized as the childhood residence of the famous Anne Boleyn. The medieval castle was handed over to the fourth wife of Henry VIII whose name became Anne Cleves after their divorce.

There were some very nice set of Tudor portraits in the Hever castle, including that of King Henry VIII when he was still a young man.

The medieval castle now has a 5-star bed and breakfast arena in it which creates a possibility of hosting a wedding ceremony.

Bojnice Castle was first built in the 12th century and happens to be among the most visited castles in the country since it was built−Slovakia.

The Bojnice Castle is known for being a good venue for many fantasy movies, such as Princess Alicia and World Without End.

This is as a result of the combining forces of both architectural designers−Renaissance and Gothic, making the medieval castle to project a fairy-tale energy.

The Neuschwanstein Castle located in Germany is among the notable medieval castles in Europe.

The castle is only a two-hour drive from Munich, good looking and worth the visit.

The medieval castle was completely built and commissioned in the year 1869 (19th century) in Bavaria by Ludwig II who single-handedly funded the construction of the building.

In the year 1886, the castle was opened to all when he died.

Records also show that the Neuschwanstein Castle has been the venue of several movies. It was the inspiration of the castle in Disneyland’s Sleeping Beauty as a result of its stunning architectural design.

Windsor Castle is one of the most widely recognized castles of the medieval era.

Known to be the most lengthy occupied medieval castle in Europe by a single monarchy.

It was built in the 11th century. The castle is well preserved and gigantic and has an interior design of Georgian style of the 19th century.

Today, Windsor Castle is known to be among the most popular tourist attractions in England, which gives us the location of the castle.

The Windsor Castle still serves as a home for Queen Elizabeth II during weekends, in addition to the role it plays in tourism.

The castle still undergoes major refurbishment projects over recent times. Sighting an example of−the two water turbines installed on the Thames to serve as hydroelectric power in the year 2011.

Because of the circular tower, moat, ramparts, and gatehouse of the Bodiam Castle, we regard it as one of the most symbolic medieval castles on this list.

Another attractive feature of this castle’s construction is the technical landscaping plan, meant solely for artistic appeal.

It is not clear what the intentions of the designers and constructors are due to the look of the castle, whether it is strictly for residence or battle.

Nowadays most castle serve as tourism revenue for both the citizens of the countries and the visitors as well.  Visitors can go on a tour a medieval castle interior and experience life in centuries gone by.

Another great function of these castles is the provision of rich scenes for movies.

Studies have shown that a number of these castles are in a state of devastation, which is not the main point of this article though.

This list of 15 most beautiful medieval castles in the world have a vast variation of age span.  It features the countries; France, England, Japan, Spain and more.

The list also included the castles that are in a state of ruin. 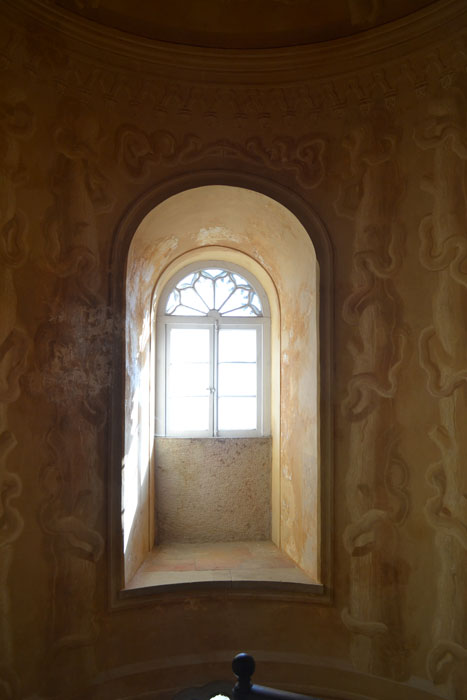 A View through the window of a Medieval Castle 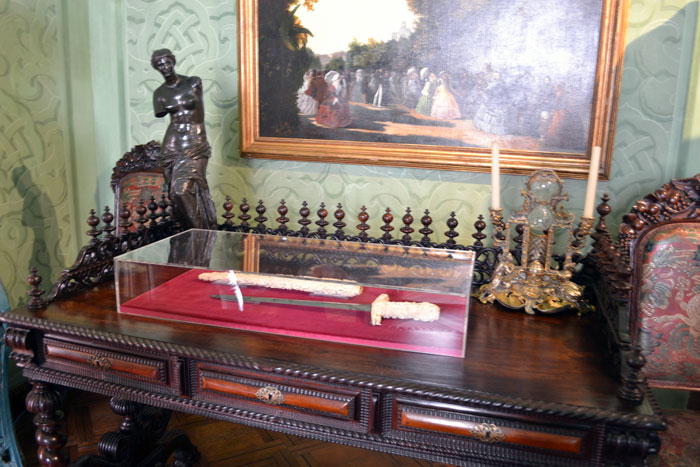 Antique furniture in a medieval castle 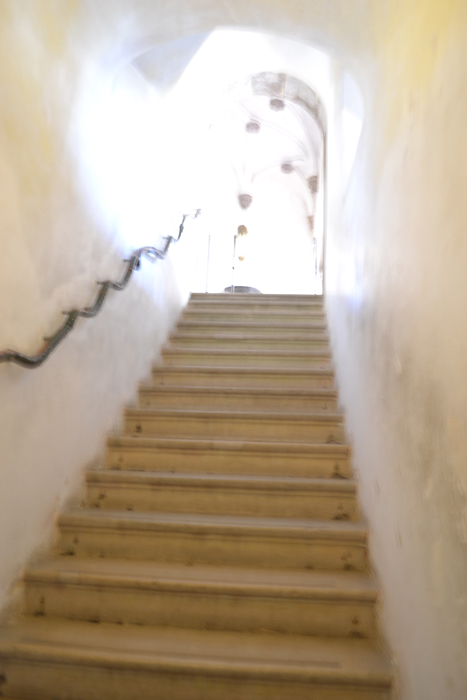 A stairwell in a medieval castle 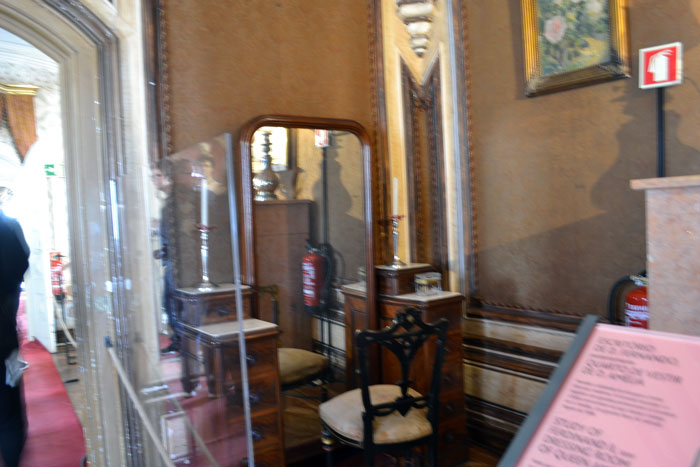 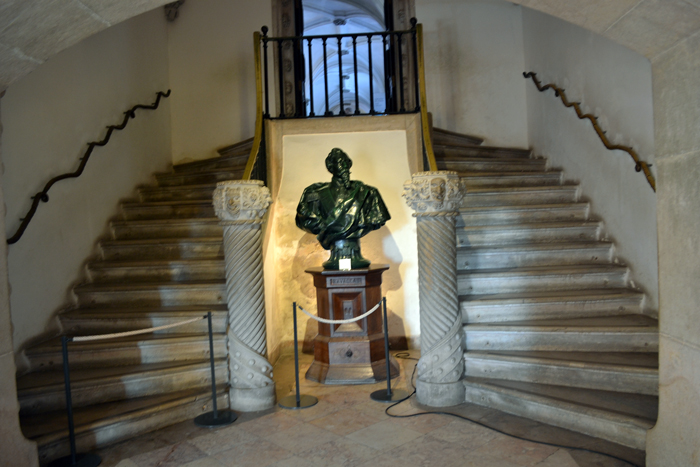 A Lobby inside a Medieval Castle

Typical Thickness of a Medieval Castle 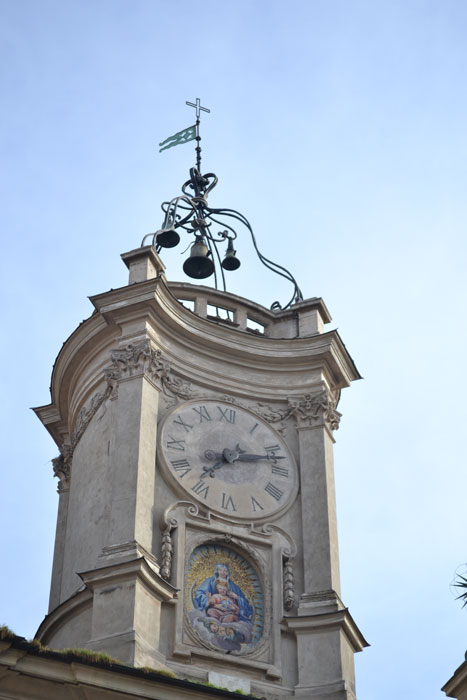 A Clock on a medieval castle 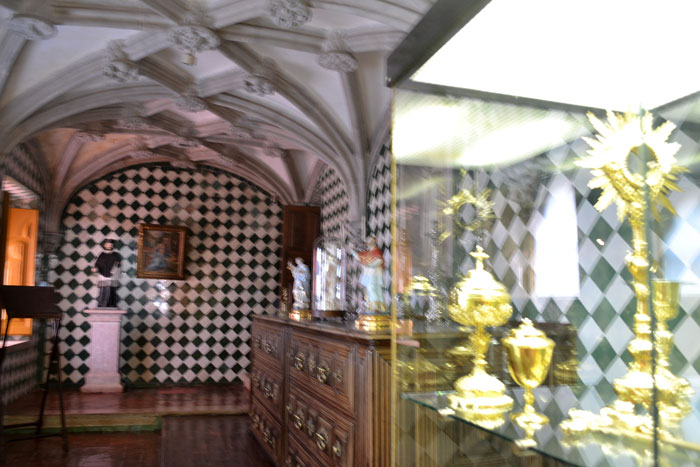 Interior view of a medieval castle 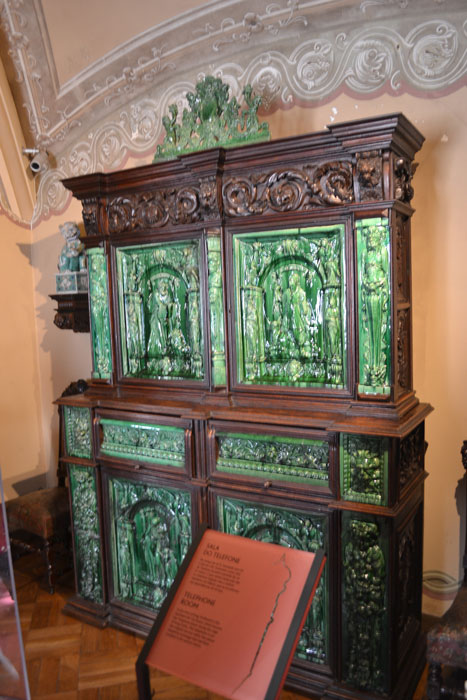 A piece of furniture in a medieval castle 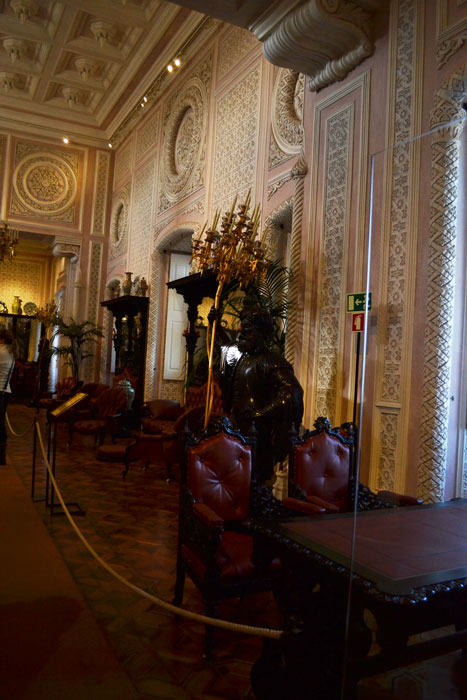 Chairs inside a medieval castle

As stated initially, some of the medieval castles in Europe serve as scenes for the creation of movies. 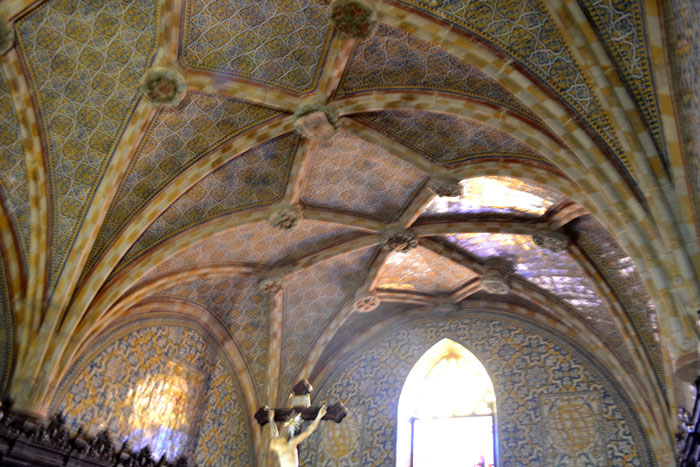 A ceiling inside a medieval castle

Therefore we can deduce from the list above that several castles that we see are venues for certain movies. 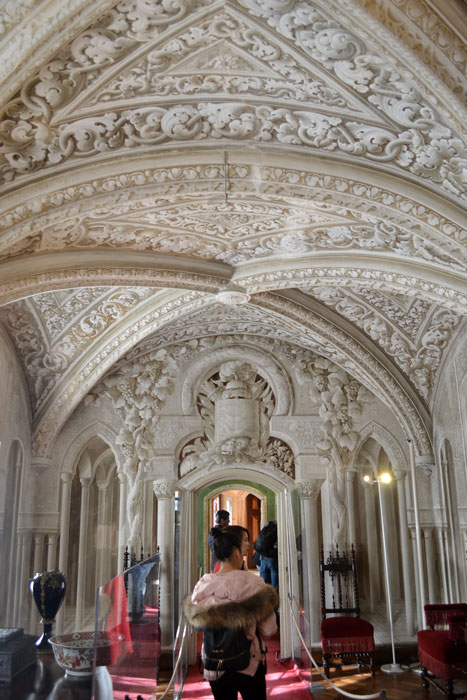 For instance, medieval castles like the Pierrefonds Castle, Bran Castle, Bojnice Castle and more have all appeared in one movie or the other. 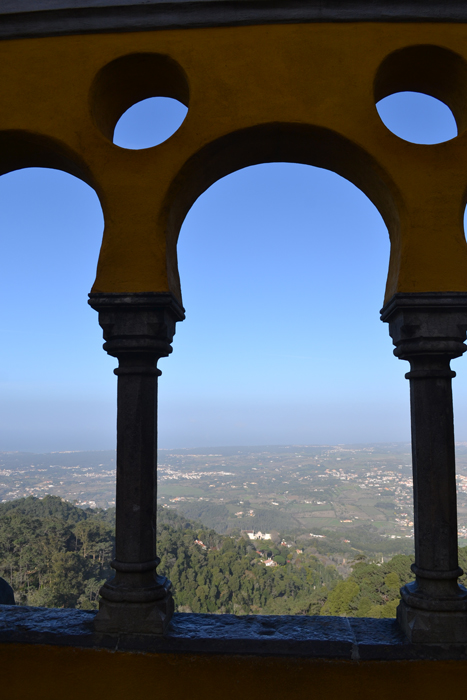 A view from a balcony of a medieval castle

Also, from this list, we can see that these medieval castles play a very vital role in tourism revenue.

They also serve as museums for the countries they reside, taking the Brand medieval castle as an example.